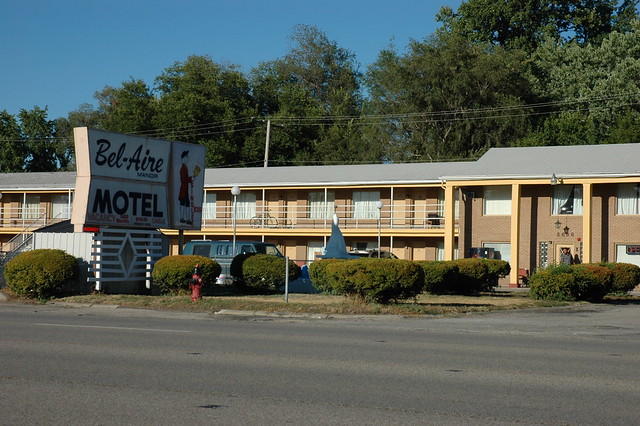 The parking lot that spreads from the Bel-Aire Motel is covered in weeds. The floor tiles are cracked as well, but the staff hired guys to work on it.

Franklin — middle-aged, white, and with a cracked smile and light-brown unibrow — stands out front of his first floor apartment, along with his neighbor Brady and Grace, Brady’s girlfriend. The three of them are drinking malt liquor under the receding noon shadow of the 2nd-floor walkway. Franklin stands while the others sit. Franklin and Brady, like more than 100 of the motel’s residents, rent rooms monthly and live out of the motel.

“Had a guy out here, fixing the walkway up there, and some asshole pulled a knife on him, chased him down the stairs,” Franklin says.

“What a fucking asshole,” Brady adds.

“Saw some asshole up there, beatin’ on his wife, so he went over there to, you know, confront him. Says, ‘Hey man, you don’t gotta be like that with her,’ and the asshole runs at him with a knife. Chases him down the stairs there. Guy won’t even come back here now to fix the walkway. I don’t blame him.”

The Bel-Aire, subject of over 700 recent code violations and over $100,000 in fines, has a history of legal fun. Currently it’s wrapped in a political game between mayor Michael Houston and current alderman (and potential mayoral candidate) Cory Jobe. Jobe is calling for the mayor to raze the prominently located eyesore once and for all. Houston doesn’t want to hand Jobe a victory on the cusp of campaign season. Either way, it seems imminent that the Bel-Aire will go down.

“I love it here. Love the manager, love the staff,” Brady says defiantly, taking a sip.”We’re good people. We’re not a bunch of fuck-ups out here drinking at, like, 6 a.m.”

“We’re not like that…that pervert son of a bitch.” Franklin points up through the walkway above. “Takin’ our pants off at teenagers going by.”

“No, those assholes don’t live here anymore. All them troublemakers got kicked out. They’re tryin’ to clean the place up, see? They’re fixing all the violations. That’s why they got all these people working out here.”

But the weeds run deeper than the parking lot surface. To remove them is not to save them. By next week, when the city’s aldermen take a vote, their fate may be sealed.

Just then a young black man in a long white tee slinks up and hangs on a vertical beam. “Ey, lemme ask you a question! You ever have a girl call you cute?” Franklin laughs and embraces him. The conversation veers into safer alleys.

2 thoughts on “Weed Removal at the Bel-Aire Motel”