10:00 p.m. — Don’t nobody hitchhike this late. It’s so dark. Shayna and I walk to the other edge of Irun, where we find a road sign pointed for Pamplona and a roundabout with a few streetlights. Perfect, except who would be nuts enough/have enough nuts to pick up hitchhikers in the dark of night. Definitely not you, first two hundred cars that drive by. Well, except for the one car that says she is going halfway and will gladly drop us in the middle of bullshitville, Spain. I make an executive decision of no fucking way, and great now Shayna’s pissed and cranky because she’s tired and somehow thinks we’re making it to Pamplona tonight. So while I’m mentally prepping to be sleeping in a grassy nook in Irun tonight, I decide to get on Shayna’s good side by taking whatever fucking ride stops for us next, because there’s no way anyone else will,

except
this
crazy
guy.

Alright, 1990’s teal sedan with your 40-something driver with long stringy hair and red t-shirt, where are you going? Ah, bullshitville. Shayna, I bet you don’t want to— oh, right, yeah, of course you do. Countless advices have told me to never take rides with bad vibes, even when you’re desperate. Except I’m more afraid of mad girls than mad strangers. Bullshitville sounds great, bet they have a great hostel there.

So this guy — “¿I’m Robert, what is your name?” “Gnocchi.” “Gnocchi.” “Gnocchi.” — who speaks mainly Basque, and a tiny bit of French, and probably Spanish but how the fuck would I know, proceeds to take us way off the main highway and up into the mountains. Invites us to sleep in his house. Fuck it. Sure.

So there we are, listening to him tell us how good we’re going to taste in languages we don’t understand, driving on dirt mountain roads that look (/feel) like they were paved by oliphants thrashing their tusks across the forest. Finally we get to the sacrificial alter, a wood and metal shed-like structure with nothing around in sight. Stops the car in front and gets out, beckons for us to follow. ‘Seems like a comfortable place to be murdered,’ I think and I trot out after him. Shayna brings all her stuff because she wants to take her things to the afterlife I guess. Inside are cold concrete floors, a few stables, and pools of water. We look around for a few seconds, Gnocchi smiles, and he lopes back to his car. He just wanted to show us his stables.

His actual house is nearby and is this place —>

It’s pitch black and cold inside the home, which is named Txoko Borda, and as he ushers us onto the couch he pulls out an axe. Ah. And then some wood blocks and starts hacking away as we watch in silence wondering if our bones are stronger than wood. The house apparently runs on solar panels, so he lights a fire in a woodstove while we wait for things like heat, and light, and water to turn on. So then this guy starts showering us with food gifts. Homemade sesame bread, honey, wood stove pizza, wine, all with us desperately trying to show our gratitude without using words. We’re going to live, maybe.

Then he — oh it’s Iñaki not Gnocchi — starts showing us pictures of 1) his nephews and 2) the field of balloons* he grows somewhere nearby. Then he lights up about eight balloons* for himself and remains utterly unfazed enough to start juggling for us. Whips out a box o’ jugglin’ clubs and starts hurling them around his body, and now I’ve given the fuck up trying to understand what’s happening anymore. Which is good, because how would I have been able to mentally process his pulling out a djembe drum and playing it while still juggling. Video of this exists, but WordPress’ capacity to host it does not.

The next morning is cool, fresh and less filled with smoke and pitted fear than the previous night. When I wake up I step outside Txoko Borda, since I haven’t really glimpsed Spain by light yet. Explosive views –> mountains forever. Iñaki lives in paradise. There’s a gurgling stream to the right of his house. To the left is a gigantic slope. To the front is a rising forest. The backyard is endless miles of Pyrénées speckled with a few idyllic Spanish pueblos. Good to be alive, good to eat homemade crema de arroz in the living room before heading off. Iñaki, Basque champion and first taste of the most beautiful semi-autonomous state in the world.

Alright now look at these pictures.

48 years, still turned on by the view

Bullshitville turned out to be Santesteban. Doneztebe in Basque language. It’s nestled right in the mountains and has all the room and red-roofed charm to shit on France’s gray, stuff-every-building-together aesthetic strategy. 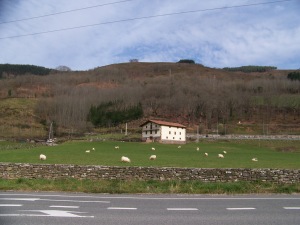 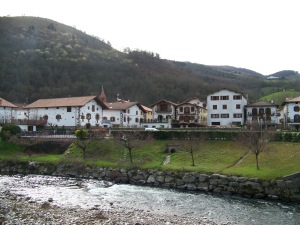 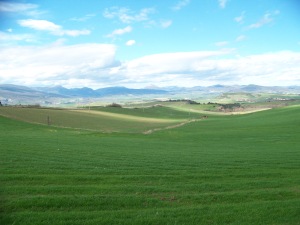 Don’t think you’ll ever get me to shut up about this place because I won’t.